BE THE FIRST TO KNOW EVERYTHING!

Subscribe to our newsletter. And don’t worry, we won’t bother you with emails daily.

Do you want more information?

All farmers would like to feed their animals more frequently and more effectively, but often the labor involved is the limiting factor.

Trioliet's Triomatic, automatic feeding system allows this wish to become a reality without having to sacrifice time or despair with complex electronics or costly maintenance.

More frequent feeding and fresher feed result in higher feed conversion because cows absorb all the nutrients they need.

The average feed efficiency in Western Europe is 1.2-1.3 and Triomatic customers have seen it go as high as 1.5-1.7. Consequently, milk production would increase, health and quality of life would improve, and fertility and average life would increase among cattle. Furthermore, an increase in feed efficiency of 0.1 would save around €150 per year in feed costs per head of cattle.

The right Triomatic for every farmer

A feeding robot can feed between 50 and 700 head of cattle, approximately 12 times a day, and in the same system we can use several robots.

Thanks to the design of the mixing tank with two vertical augers, the forage is mixed vertically and horizontally, following the “double flow” principle. Thus, perfectly mixed rations are produced, preventing the animals from selecting the food.

A wide range of options can be added to the kitchens: control for silo towers, liquid dispensers, mineral mixer, …

The robot manages and controls the kitchen, sending Wi-Fi signals. In it, there is a control panel with a touch screen where you can enter the food, the portions, groups and subgroups. In addition, the settings can be accessed via the internet on a computer, tablet or smartphone, and errors are sent via text messages. It is also possible to configure the connection with a management software through the TFM TRACKER power management program. The farmer only has to load the kitchen with fresh feed, the system takes care of the rest.

Is Triomatic a good option for me?

Automation is becoming increasingly important on modern dairy farms to produce milk more efficiently and profitably. At first sight it probably seems expensive, but if we take a closer look, we find that it is actually cheaper than conventional feeding: Triomatic saves money, labour, time and energy.

Automation means considerable time savings for the farmer, simplifying the farm management process. Raw feed can be stored in the feed kitchen for several days. You decide when you want to charge it, which provides great independence in daily life. The animals receive their sustenance while, for example, you spend a day with your family or prepare the silo.

But more importantly, Triomatic has a great impact on the health of the cattle, also reducing the costs of veterinarians and possible ancillary equipment. 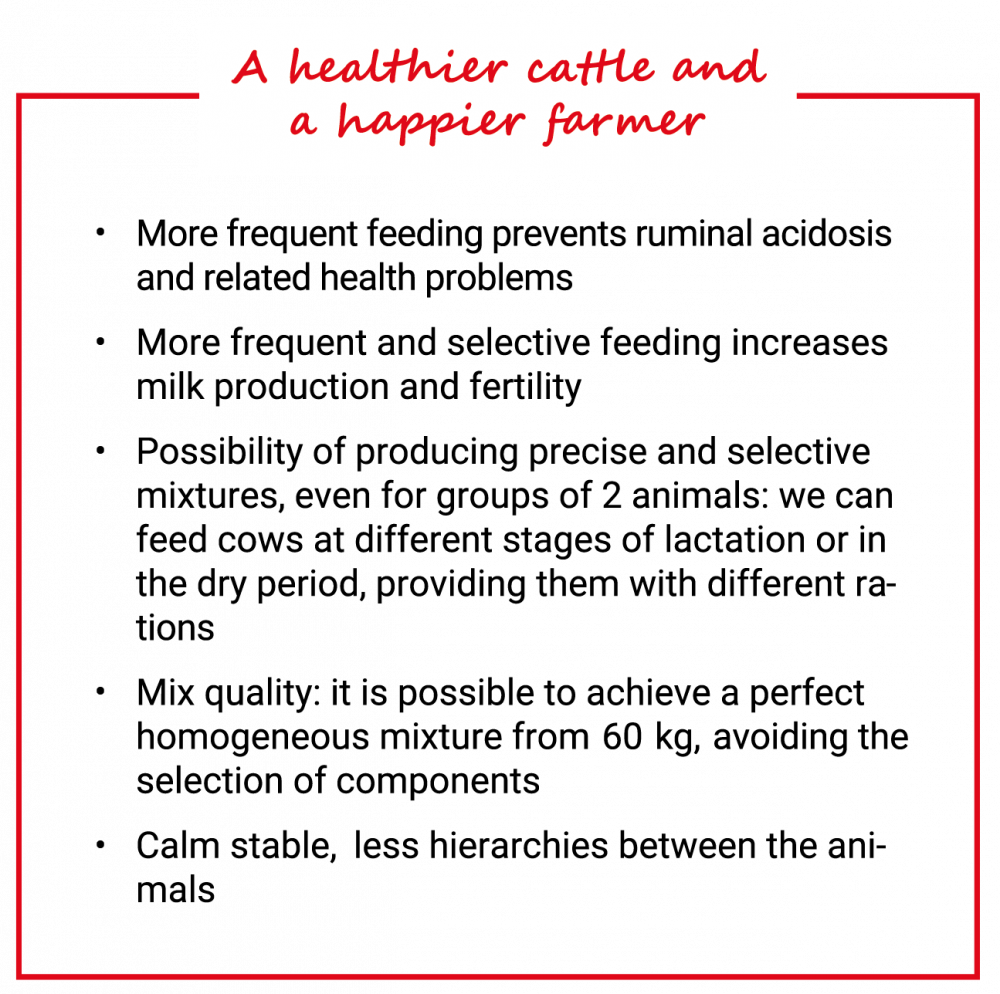